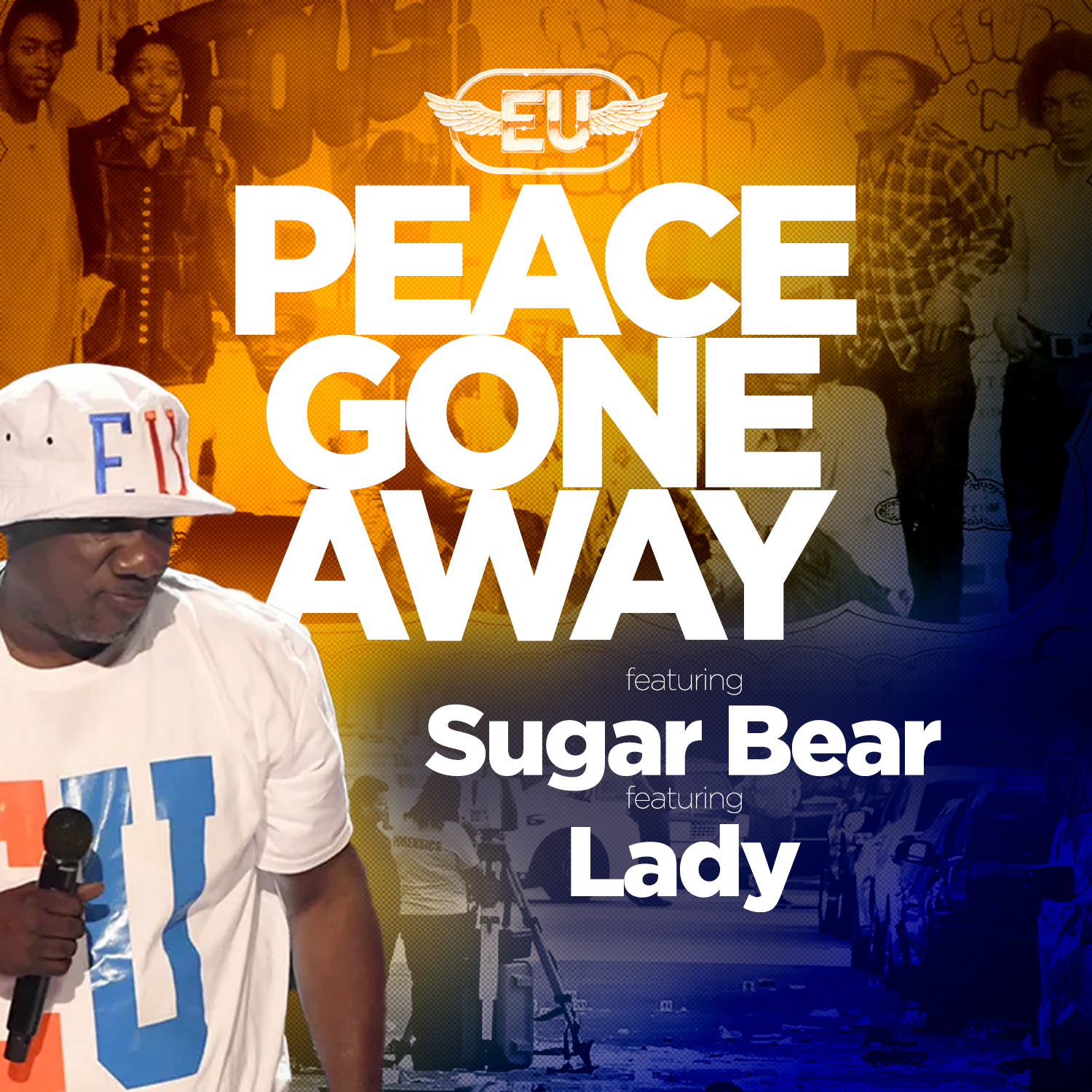 An upcoming 2022 video will re-release EU’s 1977 song Peace Gone Away. Below is a brief description, as to how and why this effort came about. This video will depict why it is important for people to come together for a peaceful society and to frown on today’s increase in violence and murder. Sugar Bear – the EU legend– believes strongly that music is a message for good. Peace Gone Away is a good example of that.

50 Years of EU
2021 represented 50 years of Washington D.C.’s legendary Experience Unlimited (EU) making music. This is a huge accomplishment, because the band, under the leadership of Gregory “Sugar Bear” Elliott, still performs. Howard University’s Traditional Arts Program, under the leadership of Dr. Natalie Hopkinson, decided to put together an effort to ensure that EU’s musical history would be celebrated and documented. Thus, the HU Traditional Arts Program staff began collecting the history that would capture 50 years of EU making music.

The group identified that over 50 years there have been at last 5 iterations of EU bands, with distinct music and personalities. The program set out to chat with each band and set up a zoom schedule to reunite musicians. Obviously, the first band to participate, was the original one, which was known as The Free Yourself Band and was also the title of EU’s first album. The original EU musicians played in the pre-go-go era and focused their sound around rock, rhythm and blues and all funk. The first EU album was released in 1977 by Black Fire Records during the time in which artists were connecting the music with issues of the period.

The Remaking of Peace Gone Away
During the 2021 EU reunion activities, the band began to discuss moments of the past and what they would like to redo. These discussions also occurred during the time when original band member Andre “Pops” Lucas was hospitalized. Many in the band agree with Andre, that Peace Gone Away, which was a tune on the first album, should be recorded again. Then Dr. Hopkinson said that HU Traditional Arts Program would support the efforts of the band to record the song again.

This idea was timely to Sugar Bear, because he was very concerned about the amount of violence and murder in the community and thought that the song Peace Gone Away could be an excellent expression to help deter this negative behavior. This was an ambitious undertaking. The group secured the talents of Roy Battle as producer because of his knowledge of go-go and because this version would have to be updated to make a difference.

The studio evening when the song was re-recorded was magic as musicians from over 50 years of EU iterations rocked the beat one more time to play seamlessly with each other again. The vocals of Melva “Lady” Adams and Cleve Battle touched everyone in the room; the horns, led by Greg Boyer, were amazing and hit in one take; JuJu and Mighty Mo held it down; Donald Fields’ guitar vibed; Roy Battle tickled the keyboards, and Sugar Bear added his energy to the positive collective and continued history in the making.

Peace Gone Away was recorded to pay homage to end violence in our community and to unite people for good. It is also EU’s testament to being citizens of Washington, DC who want a vibrant, healthy, and loving community.